The happy epicure, here in Savannah awaiting biscuits at Back in the Day Bakery.

One of the delights of our travels is we occasionally treat ourselves to eating out and sampling the local cuisine.  We are pretty picky in our choices and since Peter is such a wonderful cook, our standards are high.  Last fall, we sampled perhaps the best of Southern fried chicken in a funky place called the Old Country Store in Lorman, Mississippi where the proprietor, Mr. D, comes by occasionally to serenade his stuffed and very happy customers.   What made it special?  The sheer lightness and crispiness of the batter, which served to lock in the tender and flavorful chicken which was fried hot in a cast iron skillet. This place does chicken right.  Our time in Abbeville, Louisiana included some étouffée that was ethereal, so rather than try to compare those highlights, we opened the horizons to new experiences of some traditional dishes with new flair. Here is an eclectic mix of some of the highlights from Savannah, Georgia and Charleston, South Carolina and Wilmington, North Carolina.

At Belfords, Peter prepares to indulge in one crab cake Benedict, and. half a fried oyster po’boy. We shared!

First in Savannah, the crab cakes Benedict were amazing at a place called Belfords on Franklin Square.  The crab cakes were moist, perfectly flavored and rich with tender crab meat (very little breading).  They were topped with a perfectly poached egg and Cajun remoulade sauce with just a touch of heat.  Peter ordered a fried oyster po’ boy, just because, and loved every decadent bite.

I’ve been researching the best buttermilk biscuits, one of the traditional of Southern foods that are hard to get right and easy to mess up.  In Savannah, we headed to a beautiful little bakery called Back in the Day.  It came highly recommended and so we wandered over one Sunday morning.  One of their specialities is buttermilk biscuit breakfast sandwiches and they did not disappoint. The biscuits are perfectly made and light and flavorful.  The compact egg frittata, with cheddar cheese, was flavored with a touch of thyme.

Lemon scone, glaze, and pistachios from Back in the Day Bakery.

Later, I found out that the owner-baker was nominated for the James Beard Outstanding Baker award.  In addition to the buttermilk biscuit, the lemon scone topped with pistachios is beyond belief.  This place is worth the stop.

As New Englanders, we know a lot about ice cream and Peter will happily remind folks that we native Yankees are known to consume more of the delectable dessert than those in any other part of the country.  So when my well-traveled sister (a resident of Connecticut, one of the original thirteen colonies) recommended the ice cream at Leopold’s in Savannah, we paid attention.  The ice cream parlor is great fun with movie posters and kitschy decor, including a telephone booth, and the first time we went by on a Sunday, the line was a half a block long and we decided this is why we were staying for four days.  We returned on Monday and with no wait. 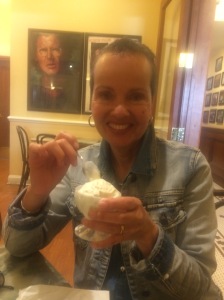 One of their hallmark flavors is called Lemon Custard, which is rich lemon ice cream with fresh lemon zest and subtle lemon flavor.   The winning recipe is unchanged since 1919 and I can see why.

So while we are on ice cream, let me share the experience of the amazing Jeni’s Splendid Ice Cream in Charleston, South Carolina.  Located in the hip neighborhood of King Street the store is filled with display cases of the fabulous and very unusual flavors of Jeni Britton Bauer who started making ice cream in Columbus, Ohio in 2002.  What distinguishes her ice cream is the unusual combination of flavors, the delectable nature of the ingredients, high in butterfat and low in air, which are creamy and rich and not filled with sugar or thickeners.  The flavors change with the seasons as fresh fruits change. 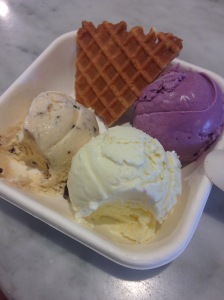 On our first trip (yes, we made two distinct visits!), it was brambleberry crisp which is made with brambleberry jam laced with tasted oat streusel in rich vanilla ice cream.  Then it was a smooth lemony, rich cream laced with what I remember as after dinner mints. Oh my.  Jeni’s has begun packaging these dreams from heaven in pints which are now available through the country, but I’m not sure if that is good news, or not!

Peter’s quest around the South was for fried oysters and after the po’ boy, it was lunch at Amen Street Fish and Raw Bar in downtown Charleston.  These fried oysters were light and tender and there was nothing left over. On a gorgeous, spring day, we walked from the restaurant to the lovely Waterfront Park and its iconic Pineapple Fountain which apparently doubles as a wading pool for residents during the heat of summer.

Grilled shrimp in butter and garlic on fried grouper at Seewee’s Restaurant.

The fried oyster sampling culminated (at least to date!) at a funky roadhouse called SeeWee Restaurant north the city in Awendaw.  The decor alone in this restaurant that’s been serving southern home cooking for decades is worth the trip.  The food was up to the locals’ recommendation.  The fried oysters were great and my grilled local shrimp on top of fried local grouper was equally tops.  So much food was served that we took it home and re-heated for lunch the next day and it was just as tasty.

We headed up next to Wilmington, North Carolina and decided to tour the riverfront downtown along the Peace River.  In the process we tripped upon a place called The Peppered Cupcake, which apparently is known for its remarkable tiny cakes.  We have a world class pastry chef in the family (one of my sisters) so we are accustomed to some of the best in buttercreams, ganache, and light cakes. 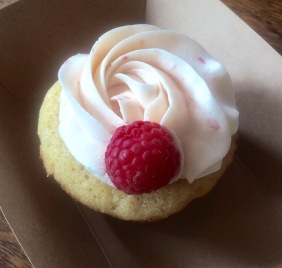 Let me say that this place is amazing.  First of all, the little restaurant is comfortably air-conditioned and that is a first clue as to the attention of the owner-baker.  Climate control makes for superb buttercream chemistry and texture. Second, the little cakes are gorgeous to look at, each one a tiny masterpiece that one hesitates (but only briefly) to destroy.  And third, the taste which is often an unusual combination of ingredients. It’s called The Peppered Cupcake because of the addition of peppers and chilis that are used in some of the recipes.  In addition to that, the offerings include coconut buttercreams, and brownie chocolate ganache and the devine rose water raspberry.  We fully intended to eat one in the sweet little Victorian shop and take the other two home but the poor dears never had a chance to make the trip after we tasted the first morsels.  Besides, it was too warm a day and the buttercream would have been stressed out.  Really. 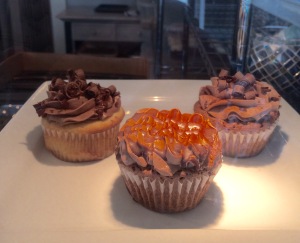 Ending this Mother’s Day post with a variety of chocolate offerings including mocha, peppered mango, and coffee buttercream from The Peppered Cupcake.

Peter and Liz continue their gastronomic sampling through North Carolina and Virginia as they work their way around the South in their Airstream.

Posts from the road