Our vacation destination, the Grand Tetons of Wyoming.

On August 27, we left Las Cruces for a vacation away from the triple-digit heat.  Our plan was to head north about 1,200 miles, landing in Kelly, Wyoming on Monday, August 31 and then head up to Bozeman, Montana to visit some friends, returning to Las Cruces by September 20.  Many of you already know of our three-decade-plus love affair with the Tetons and Moose, Wyoming.  It was there, at the Triangle X Ranch, where we would re-unite with our dear friends, wander on horseback through the Bridger-Teton National Forest, along the Snake River, and up to big aspen groves, repeatedly falling helplessly under the spell of the breathtaking natural beauty of the Grand Tetons.  The ranch was the place where, over the years, Peter and I made some of the most significant decisions of our lives, moved to a clarity that we found nowhere else.

Our campsite in Gros Ventre and home for 13 nights.

When we took to living on the road, all kinds of decisions had to be made.  With heavy hearts, this year we decided we would not go to the Ranch, ending a 35-year tradition.  In its place, we substituted an extended vacation in the Tetons staying at one of our all-time favorite campgrounds at Gros Ventre.  The campground, in the national park, is all first-come, first-serve with no reservations. There are mostly dry camping sites and the few electric-only ones are in such high demand that in past years, it took a day or two of dry camping before an electric site opened up for us.

We arrived mid-morning on Monday, August 31 expecting to put our name on the list for electric and take a dry site for a night.  We were delighted to find there was one electric site left and we snagged it for 10 nights (the maximum stay here its 14 nights). Two of our nearest neighbors were Airstreamers, re-enforcing the observation that we consistently see more Airstreams at this one campground than at any other one we have ever been in.  The highest count this time was 21 and it has remained right around that number the entire time we were here.

On the shore of Yellowstone Lake.

Six days later on Saturday of Labor Day weekend, we had the first of our two unexpected vacation experiences.  Saturday was crystal clear, cool, and cloudless and we headed up for a day trip to the south entrance of Yellowstone National Park.  We drove up and along the shores of the beautiful Yellowstone Lake, formed in one part of the caldera which marked the volcanic eruption of 640,000 years ago.  From there, we wandered up to Madison Junction, found an idyllic spot for a leisurely picnic lunch along the Madison River and turned back south around 1:30pm.

The oxbow in the Madison River in Yellowstone where we had a picnic lunch.

Surprised, Peter spotted a huge white plume of smoke in the distance and the heavy traffic around the geyser basins was now slowing to a crawl.  For 1 1/2 hours, we inched our way south covering barely 15 miles along a two-lane road. At one point we rolled down our window to ask a guy heading in the opposite direction (who looked like he may know something) what was going on.  He said the road at Craig Pass had just closed because the Lone Star Fire, proximate to the pass and the only road leading from Old Faithful to the south entrance, had flared up creating dangerous smoke and reducing visibility to unsafe levels.

Thousands of cars near the geyser basin clog the two-lane roadway, closed by the Lone Star Fire.

Traffic was being looped south through the massive parking lot at Old Faithful and then turned back north  (the direction we had just come from) to exit via either the west or the north gate.  We made the decision to turn around before we got to Old Faithful and double back to Madison Junction, making it back to the site of our picnic lunch (now 3 hours ago)  and continued out the west gate of the park.

A glorious sunset welcomed the start of our 147-mile detour through West Yellowstone and down to Jackson Hole.

We arrived in West Yellowstone just before 6:00pm having traveled a grand total of 45 miles in 4 1/2 hours.  From there, it was a 147-mile detour through a section of Montana, Idaho and then back into Wyoming.  We crossed over Teton Pass under clear and cold darkness, dropping  into Jackson Hole, and making it back to our Airstream at 10:30pm.  We were exhausted but safe and reflective.  There were some important lessons in this experience. 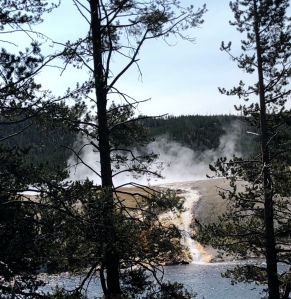 Plenty of time to take pictures of the geyser basin from the line of traffic.

First, if you have to be in traffic for hours, averaging 10mph, Yellowstone is not a bad place to be.  The scenery here was far superior to say, what we experienced on a very similar ordeal, crawling around Houston through construction zones and four lanes of urban traffic last November.  Just sayin’.  Second, we noticed that the people in the thousands of cars on the two lane road were mostly cheerful and friendly, letting drivers who had to weave out of line for the essential emergency pit stops, to re-enter.  Third, not once in 4 1/2 hours did we hear anyone lay on a horn or exhibit any road rage. The best part of human nature seems to emerge in the midst of God’s great creation of unspeakable natural beauty..

Then two days later, on Labor Day, our second great vacation surprise occurred. The weather had shifted in the valley that afternoon and park management come through handing out fliers warning of winds of 40 to 50mph with potential for gusts up to 70mph.  Everything in the campsite had to be stowed and battened down.  What wasn’t forecasted was the heavy wet snow which started around 7:00pm.  With full tanks of propane and plugged into power, we felt secure.  That all changed around 9:30pm when we felt the winds pick up and could see swirling, heavy snow out our back window.  What sounded like squirrels running around on the roof we soon identified as twigs and branches falling off the nearby cottonwoods.

By 10:00pm thing got progressively worse when the power went out.  We decided to attempt to go to bed when we heard an incredible crash on the roof in the bedroom and a few minutes later, I noticed snow and leaves raining in through the ceiling fan vent.  The wind was howling now and we made the decision we had to move from the campsite as soon as possible.  Peter took the outdoor duty, hooking up in miserable wintry conditions with wind and blowing snow and inky black darkness.  I had to figure out how to stop the outside winter conditions from becoming indoor conditions.

Inner tape and plastic tape repair job to keep snow and debris out.

About one hour later, I had managed to patch the shattered ceiling fan hole, Peter had us hooked-up and we moved to the overflow lot where  snow drifts and downed limbs made for a treacherous drive.  We parked in the middle of the lot alongside others and decided to stay in the truck.  We didn’t know if the roof repair would hold in the trailer in the storm so the certainty of a dry and warm spot meant we stayed in the truck. It was miserable, I won’t deny it.  At about 5:00am, the weather had calmed down and we felt safe enough to move into the trailer, check the inside roof repair and run the heater off the batteries. Others in the overflow lot helped.  One guy lent us a ladder so we could peak at the roof and the damage.  Here is what we found.

MaxAir II shield first to be shattered by limb.

Black plastic fan cover next to be pierced.

Another guy offered us a broom to begin sweeping snow off the trailer. We moved to a spot along the side of the lot and waited for the sun to begin the melting process.  Peter unhooked the truck and got out the generator so we would have power in the trailer.  We headed to town for materials to do the temporary repair. 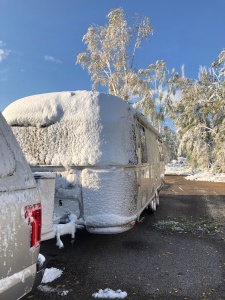 T2 covered in wet snow as the sun came up on Tuesday morning.

Our Airstream neighbor came by the lot to tell us the power was back on in the campground.  We returned to our original site, thankful to them for making sure that the park cleaned up the debris on our site so we could return.  We called a mobile RV repair guy and he came out on Thursday, removed the final piece of a limb that had lodged itself, Excalibur-like, into the outer MaxAir ceiling fan cover.  He removed the fan cover and then patched the hole in the fan vent cover so that we could most likely stay dry until we could replace the fan and its cover.

Early evening hike along bike trail after the snowfall from Labor Day.

We decided to forego our trip to visit friends in Bozeman and head back to Las Cruces and repair the damage.  There was a great stretch of good weather forecast for the 1,200 mile trip.  We extended our stay here by 3 more days to wrap up some of the things we had  hoped to do now that the weather had once again become sunny and cool and dry.  We hiked another section of bike trail in the national park under spectacular clear skies and warm temperatures.  We hiked the String Lake trail to Leigh Lake with Mount Moran as the backdrop. We reminisced about the five mile hike we had done last week along Jenny Lake where we enjoyed a picnic lunch, and made a series of video postcards to send to our family members. We took a late afternoon “game” drive and rounded out the tally sheet:  1 bull moose and several cow moose, cow elk and calves, mule deer, pronghorns, and a herd of about 200 bison..

We watched darkness descend on the mountains, creating stunning silhouettes.  This continues to be a place of astonishing beauty with powerful reminders of the immensity of natural forces like fire and weather.

And like the most enduring of unconditional love affairs, we remain undaunted by this year’s events.  We are already planning for a return trip in 2021 only this time, we’ll be sure to leave the shady campsite before the snow flies and the winds pick up.  We may be in love, but we aren’t blind!

Sending blessings and gratitude from our last hike of the vacation, this at Leigh Lake on Saturday morning, Mount Moran in the background.

Liz and Peter continue their pilgrimage to here, this time heading from Wyoming back to New Mexico, in their Airstream.

1 thought on “The Tetons, a wildfire, and snow.”