During our time here at Oliver Lee Memorial State Park we have had time to explore more of New Mexico. I wanted to share some of our discoveries, hoping that some may make it to your bucket list of things to do here in the Land of Enchantment. 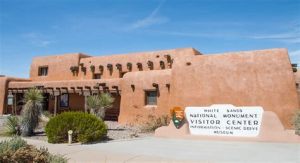 Last post I mentioned that we visited White Sands National Monument.  I wanted to comment on their Visitor’s Center because it is really worth a stop.  It is architecturally  interesting having been built by the Civilian Conservation Corps in the 1930s.  The traditional Pueblo-Revival style building includes a center courtyard, native plant garden, museum, a lovely gift shop and a theater that shows a wonderful orientation film called A Land in Motion, which tells about the formation of White Sands.  The film is shown on the hour and half-hour and its very well done.

Peter standing next to one of the ubiquitous ristras, dried Chile pods, in Mesilla.

The Visitor’s Center is right on US 70 which leads over St. Augustin Pass which separates the Tularosa Basin and Alamogordo from Las Cruces.  The beautiful Organ Mountains offer the backdrop to Las Cruces which sits 10 miles west of the Pass. We’ve made a couple of day trips to Las Cruces and really enjoy it.  It’s about 100,000 people and meets the essential criteria we have for ideal communities:  a university (New Mexico State), a thriving downtown, a vibrant art scene, museums, great food and a diverse population. Plus we learned the town voted “blue” in the last elections.  Las Cruces is looking really good for future possibly longer stays. 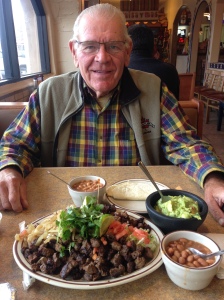 Tacos for two with grilled steak and grilled pork and all the fixings at Andele’s.

Today, the charming little town contains galleries, restaurants, a church and some really welcoming people.  The little square in the town features the historic building where Billy the Kid went to trial for murder during the Lincoln County Wars of 1878.  The Fountain Theater shows independent films, mostly, but check in advance to see if there is live entertainment. So far, our favorite place to eat in Mesilla is a restaurant called Andele’s where their Taco Tuesday special for two can’t be beat.  The food is freshly made and delicious, the guacamole over the top yummy, and their salsa bar features green and red salsa and a chipotle sauce that will definitely clear your sinuses.

The divinely tasty biscochito, covered in cinnamon from Lujan’s.

Those of you who follow our blog know we love to visit local bakeries.  At the top of the charts in Las Cruces is a place called Lujan’s Bakery. Let me just say there aren’t enough “stars” in a 5-star rating to describe this place. Traditional Mexican bread, called Pan de Muerto, empanadas (the pineapple are amazing), tasty sweet breads, and my favorite, biscochitos. These little cookies are actually the official state cookie of New Mexico (no wonder I love this place), delicately spiced with anise and cinnamon and made traditionally with lard so they are especially crumbly and so tender. Oh my!

As long as we are talking about traditional New Mexican treats, the sopapillas here are a must-taste experience.  The delicate, leavened wheat dough is flash fried and served hot so the sweet-smelling treat is airy, puffy and a magical carrier for the honey or powdered sugar that turns it into dessert.  We caught up with my sister and brother-in-law during their vacation in Chimayo in October, and after touring the Sanctuario de Chimayo, we enjoyed freshly made sopapillas at the Rancho de Chimayo. Peter and I were first introduced to the Rancho when we came here on our wedding trip in 1989 and every time we return for dinner, we sample the sopapillas. 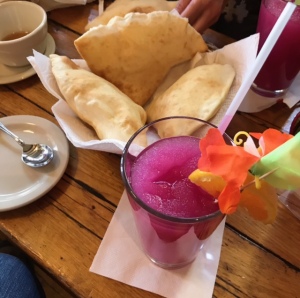 A basket full of fresh sopapillas, served with honey at the Rancho de Chimayo.

While in the lovely little village of Chimayo, we visited Ortega’s Weaving Shop which along with the Trujillo’s Weaving Shop keep the tradition of multi-generational weavers alive.  We have visited Trujillo’s many times during our travels to New Mexico and have several pieces that we continue to treasure, so visiting Ortega’s was a special treat to share with my sister and brother-in-law.

Both of these local family of weavers trace their ancestry back to the 17th century and the original Spanish settlers. The few thousand churro sheep that came to New Mexico with Spanish expeditions were valued by these original settlers and become established flocks in the new territories. 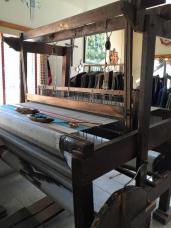 Looms for handweaving at Trujillos in Chimayo.

New Mexico proved to be a hospitable place for churro, and the sheep thrived, becoming an important part of the Spanish colony’s economy. Wool in an unprocessed form would be too difficult to transport (other than on the backs of sheep) to be of value as a trade item. Blankets, however, were in great demand by surrounding trading partners, and by 1840, records show tens of thousands of weavings traded out of New Mexico.  The history of stories like the weavers of Chimayo offer an example of the things we love about New Mexico.

On a cool and bright fall day, we drove up Highway 82 from Alamogordo to the village of Cloudcroft.  The elevation is 8,600′, a rise of over 4,000′ above the Tularosa Basin valley floor where Alamogordo sits.  The town is charming with a local brew pub, Cloudcroft Brewing Company, which has a reputation for serving great pizza.  We decided to save that experience for our next visit. 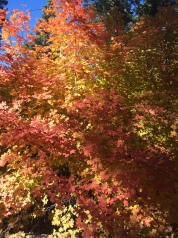 The maple trees were in all their autumnal glory.

The town is known for the remarkable Trestle Railroad which was built in the 19th century and climbed up the steep canyon to the town of Cloudcroft.  Just before the village is a sign for the Trestle Recreation Area.   There are a couple of hiking trails and overlooks to the Tularosa Basin which are extraordinary. The Rocky Mountain maples that grow here in the Sacramento Mountains had changed into their autumn colors and reminded us both of our fall days back in New Hampshire.  The park is closed for the season since Cloudcroft has now experienced it first snows so do check the website before heading out this way.

We have two weeks left here and expect to have another post before we head east, sharing the remainder of our current adventures here in the Land of Enchantment.  May your Thanksgiving holiday be one of abundance. 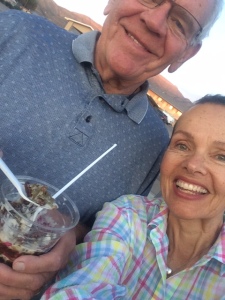 Green Chiles appears on everything here, including custard. It was surprisingly tasty.

Peter and Liz continue their time in New Mexico, exploring the wonders of this beautiful place from the comfort of their Airstream.