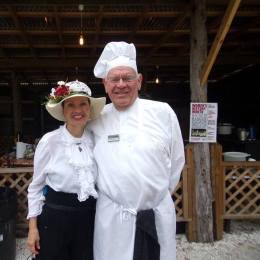 In-costume at Koreshan State Park during Women’s History Month with my favorite baker.

I’m writing this blog on my birthday and I have been given the most exquisite of gifts: a morning of solitude in T2, our sanctuary.  I’ve been reading poetry and found two snippets from poems that fit my reflection today.  Stanley Kunitz, at the age of 79 mused, “Maybe it’s time for me to practice growing old. The way I look at it, I’m passing through a phase…” while Billy Collins, at the age of 70, whimsically observed, “One bright morning in a restaurant in Chicago as I waited for my eggs and toast, I opened the Tribune only to discover that I was the same age as Cheerios”.

Isn’t that just the most liberating analogy, especially knowing how much joy and happiness and life has been wrapped up in the years that people have delighted in Cheerios? 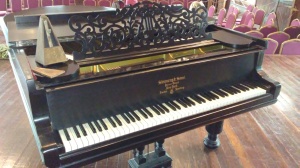 Imagining what “Happy Birthday” would sound like played on the Steinway at the Art Hall.  Photo credit: Ann Mangan.

Yesterday, while working in costume in the Art Hall, I interacted with some children in new ways.  I think it’s because of the costume, which speaks of something (and someone) old and historic but somehow, approachable.  One five-year-old boy, while telling me his age, asked me how old I was, since I looked “even older” than his grandmother.  I wonder what his reaction would have been if I had answered, “Well, at least I’m not as old as Cheerios”.

A twelve-year-old girl was taking an iPhone video of the curiosity-of-me in costume while I was talking to her family.  At some point, she noticed the Steinway piano and when I told her its provenance, her eyes widened and I knew she must play the piano.  Asking if she wanted to get up close and take a picture of the Steinway, she quickly said yes.  Later I took a picture of her sitting on the bench so that she could share it with her piano teacher.  She was bursting with glee. For me to “practice being old” in my 19th century costume, was it easier for the children to drop their guard and be authentically kids?

Some of the courageous women of Koreshan Unity in the mid-1920s. Photo credit: Florida Gulf Coast University archives.

But it was the teenager who came in late in the afternoon who really moved me.  She had remained in the background while I was orienting other guests so as they left I asked if she had any questions.  She stepped forward and asked about the history but she was most interested in the women of the Settlement and why, in the late 19th century, they came to the swamps of Florida.  In her dark brown eyes there was an intensity much older than her chronological age.  After hearing about the disenfranchisement of women, the stories of child-labor that drove the utopian movement she said, “these women must have had a lot of courage”.  I realized I was seeing that quality of courage in her young face.  She saw the courage in other women because it held up a mirror to her own courage.  As she was getting ready to leave, she made a brief gesture toward me, almost as if asking for a hug, then quickly thrust out her right hand to me, and said, “thank you for taking time to talk to me”. 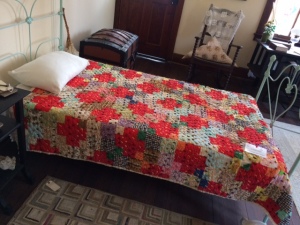 This weekend is the annual quilt show at Koreshan Unity Settlement.  We display some of the historic quilts that the Koreshan women themselves made and used, like this beauty.

This whole month of March, sharing the stories of some of these women of Koreshan has been like this.  They have been gifts for me in so many ways.  My cousin Sheila and dear friend Lydia came down from Sarasota for one of the public tours, which meant the world to me.  A long time friend from our days at the Triangle X Ranch in Wyoming, who now lives in nearby Bonita Springs, organized a private tour which launched the entire month’s events.  The tours have touched the hearts of the guests in very personal ways and as my young visitor said, it is the call to be courageous that speaks most eloquently.  How are we called to be courageous in our own lives?  When we look into history and see how other women have shown up, it can be inspiring but that was their call.  What speaks to each of us?  It’s a fitting birthday meditation, don’t you think?

Earlier in the week, Peter and I had a leisurely lunch with longtime friends from New Hampshire who are spending three months in Florida.  For these friends, it was an act of great courage for them to stretch themselves and buy the place they had been renting for a few years here in Florida, easing their winter survival routines in New Hampshire and becoming more gentle with themselves, accepting the abundance of a life that made this possible.  It takes courage to follow that guidance and to know that the opinions of others are more about them than anything.

I think of my youngest sister who has courageously answered a called in her ministry to enroll in a Doctor of Ministry program at Fuller Theological Seminary, pushing the limits of what others might consider “sensible and reasonable” for a person in her 60s, defining for herself what it means to “practice being old”, as Kunitz might say.  My middle sister is battling through breast cancer and the side effects of surgery and treatment and her courage helps her navigate the outcomes and challenges of living with unanticipated impacts on her health. Sometimes courage is about making a choice between a couple of options, and sometimes it is about learning to navigate the path we didn’t choose in the first place.

Last year for my birthday, I gave myself a gift, which took some courage.  I enrolled in a Master of Theology program at Saint Leo University.  It is the first time that my youngest sister and I have both been enrolled in college/university/seminary at the same time since 1971.  The first two courses were online and very challenging because of the software and IT issues that I had to learn.

This semester, I am taking a course on the ground on campus (Saint Leo University is just north of Tampa, Florida) and it’s awesome.  For those of you wondering about it: (1) It will take four years to complete the graduate degree; (2) No, I have no idea what I am going to “do” with it; (3) Yes, it’s something I have wanted to do my entire life but was distracted by the “shiny things of life” along the way; and (4) Yes, it’s true that all four of my younger siblings already have at least one graduate degree each and I’m the outlier.  So, I admit that this may have contributed to the “what the hell are you waiting for, Liz” decision.  “It’s time.” Just sayin’…. 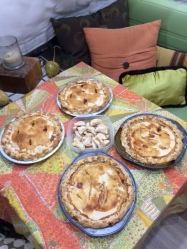 Peter has been in the Cafe at the Settlement this morning, having been invited to add Sunday cooking of the traditional recipes to his Wednesday stint.  He’s very happy and today was busy, so lots of new guests had the opportunity to taste some of the Koreshan treasures. Pictured here are his offerings of two mango pies, two lemon pies, and some bite-sized lemon curd turnovers, which are too tasty to have in T2.

Next on the birthday agenda is a drive to the beach for the sunset.  It’s one of the highlights of our life here in Estero, knowing the beautiful beach is just a few minutes away.  We throw two beach chairs in the back of the truck, grab our beach shoes and sunglasses and we’re on the way.  Simple.  And considering I’m passing through a phase, as Kunitz writes, traveling light makes it much easier for me to pilgrim-on.

Here’s to all of you of a certain age who remember this Cheerios packaging from the 1950s.  “High-ho, Silver.  And Away… to the beach.”

Liz and Peter are continuing their winter at Koreshan State Park in their Airstream, enjoying the endless abundance of friendship and love and good health.

3 thoughts on “Celebrating my birthday with the women of Koreshan in Florida.”