Sunset at White Tanks from our beautiful campsite.

We both experienced the poverty of heart leaving dear friends in California. We sailed along in silence, towing our Flying Cloud. Shortly after crossing into Arizona, we re-entered the Sonoran desert and after spotting the first towering saguaro, with their open arms lifting skyward, we felt welcomed. Returning to places that we love is one of the treasures of this pilgrimage so pulling into White Tank Mountains Regional Park in the golden late afternoon light refreshed us. The cholla are in bloom now and plump buds adorn the top of the saguaro, like tiaras. The desert marigolds continue their endless blooming, palo verde are fragrant with their yellow flowers, now buzzing with busy honey bees.

We were going to stay here two nights and then continue further east but Peter decided he wanted to spend his birthday here so we added one more night.  This gave us the opportunity to visit Pueblo Grande Archeological Park in downtown Phoenix.  Our friends who live here in Scottsdale had told us about it on our earlier trip in February so it went to the top of our list this time.

This site had been occupied from 450 to 1450 A.D.  Like all of the archeological sites we have visited, this one had a population that ebbed and flowed over those 1,000 years. The earliest inhabitants lived in pit houses in small communities and focused on the labor of first building and then tending to the elaborate and extensive canal systems that emanated from the Salt River. 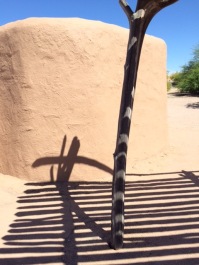 At that time, the Salt River flowed year-round, providing essential water for the settlement of the valley.  By 950 A.D., the community had grown and established itself in the area, and the first mounds began to appear.  These started out as spiral in shape, and by 1150 A.D., they became rectangular in shape.

The mounds were built on piles of trash (ashes, broken pottery, charcoal, and food remains) and soil sealed with something called caliche, a lime-rich soil found here in the desert which, when mixed with water, forms a kind of plaster that glues things together. The mound at Pueblo Grande most likely stood about 35′ in height, surrounded by adobe walls which limited access to the flatten top of the mound.

Cotton was one of the signature agriculture crops in the Salt River valley.

Initially, the idea was these mounds may have been used for religious purposes, as they were in Mexico.  Current thinking is they may have been the site where the people of power in the community lived, able to survey the irrigation systems, organize labor projects, and generally oversee the village below.  We were struck here by the similarity with the rectangular mounds, canals and irrigation systems we discovered in Florida at the Randell Research Center, built by the Calusa around the same period of time (450 AD and forward) along the Gulf Coast. Common ancestral DNA? 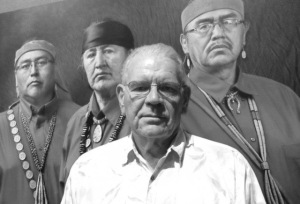 Here is our birthday guy in front of a poster with the members of Todi Neesh Zhee, artists from Canyon Record. He kinda fits right in, don’t you think?

After touring the ruins we went to the Visitors Center where a special exhibit featured Canyon Records, one of the oldest independent record labels in the business which is known for its focus on Native American music.  Founded here in Phoenix in 1951, the company is known for its excellence in production of recordings appealing to both the Native American market and to the cross-over market of non-Natives. It’s most well-known artist is Navajo-Ute flutist R. Carlos Nakai, whose music provides the soundtrack for much of our pilgrimage (as I write this blog I am listening to his recording Canyon Trilogy).  It was so powerful to read the statements from the artists whose work has been preserved by Canyon Records and to realize without even knowing it, how our lives have been enriched by this record label.  Grateful.

From inside T2 looking out at City of Rocks from our first campsite.

We returned for three days to the beautiful City of Rocks State Park in New Mexico.  We were last here in late April 2016 and looked forward to our return.  This time, we elected for dry camping since we have our Zamp Solar Panels to keep us comfy.  This is an amazing geological formation that should be on everyone’s short list when visiting New Mexico. 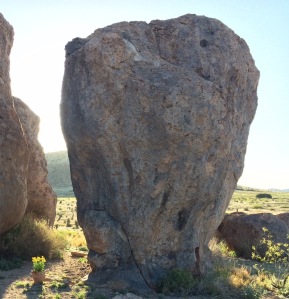 Rock formations of remarkable shapes make up City of Rocks.

The place is a collection of volcanic tuff, the magna from a volcano from 28 million years ago, which cooled and cracked and with the effects of water and wind, the rocks eroded creating remarkable shapes. There are dry campsites tucked right up in clusters of huge boulders. We selected one and had spectacular views to the east of the sunrise, one of which is captured above. 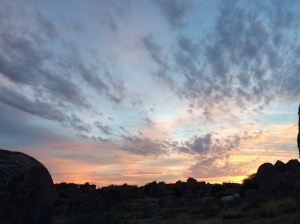 Glorious God-light at sunset calls for an “Amen”!

We were all equally shocked when we realized that not only were we Airstreamers, we were all from New Hampshire!  They were from Wilmot, NH which we know quite well.  We exchanged travel details, contact information, and learned (once again) how Airstream travelers frequently have shared ideal campgrounds. Their favorite one in Florida? Koreshan State Historic Park and yes, they are coming to visit us when they come down in January 2018 since we have agreed to return as docents for a second year. Connections continue.

We drove into Silver City to do laundry, and then spent a couple of hours poking around and checking out the place.  Somewhere in the recesses of our imaginings sits the question of where we might want to stay for a bit “longer” time on our pilgrimage.  We have some criteria now for getting answers to the question, “could we live here?” (topic of a separate blog) but after our visit here last year, Silver City and the surrounding Mimbres Valley landed on the existential list.

As if from central casting, it looks like these folks moved from Brattleboro, Vermont to Silver City, New Mexico!

Silver City is an interesting little town that reminded us both of Brattleboro, Vermont only with a southwest touch.  In 2006, the New York Times did a feature about the town and noted,  “people who live in Silver City like to say that their town of 10,000 offers ‘the real New Mexico experience.’ Perched on the edge of the Gila National Forest in a high-desert wonderland of ponderosas, deep gorges and red-rock mesas, Silver City is a bit rough around the edges, especially compared with places like Santa Fe and Taos – but that’s the way the locals like it.”

We stopped into the Silver City Food Coop and discovered our favorite granola, Back Roads (made in Brattleboro).  As we made our purchase, the cashier was happy to extend our members’ discount from Keene’s Monadnock Coop. It brings new meaning to the phrase “and that’s the way the locals like it”.

Carlotta Thurmond was reportedly the inspiration for “Miss Kitty” on the TV series, Gunsmoke.

Apparently, in the history of Silver City, there was a woman whose life provided the grist for the mill of legends that locals here also like. Carlotta Thompkins Thurmond was known as the most famous gambler in Texas in the later part of the 1800s.  Born in Kentucky, she learned about gambling while traveling through Europe with her wealthy father.  Moving to Texas, she gambled as “Lottie Deno” and was known by fellow gamblers for “having ice in her veins” (and presumably a purse full of winnings).  At some point, she met a fellow gambler and the two moved to Silver City, New Mexico where they married.  Carlotta transformed herself somewhere around the turn of the century, giving up her previous profession, became a philanthropist, Sunday-school teacher and co-founder of St. Luke’s Episcopal Church in Silver City.

Oh, the possibilities for transformation are endless. So, whatever it is that you are imagining, keep on dreaming!

Liz and Peter keep heading east in their Airstream, crossing through Texas and on the look out for more adventures, discoveries, and more possibilities for transformation along the way.

1 thought on “Phoenix then east to Silver City, New Mexico.”